Sushi Bar Franchises: What is there? 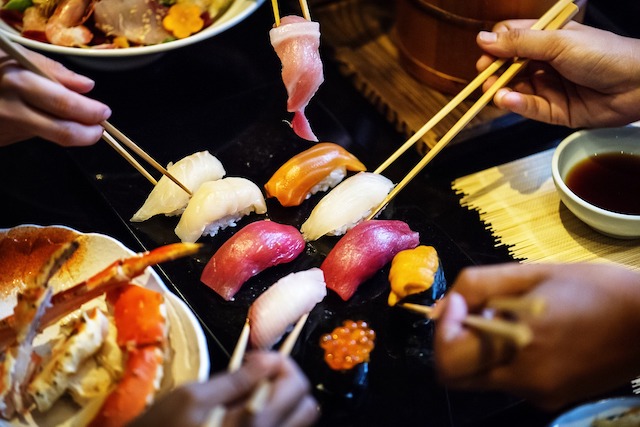 If youre looking to get into franchising and see the food industry as your best option, you may want to consider investing in a sushi franchise. With a wide range of investment opportunities on offer, theres a sushi business to suit every taste.

In recent years, sushi has taken the UK by storm, and it's no longer too difficult to find a good sushi bar in most big cities. Even pack-lunch sushi has taken off  consumers are buying so much of the raw fish from high street shops and supermarkets that the retail market is now worth approximately £68 million. This makes it a tempting prospect for any would-be investor.

Though many cities are crying out for a new sushi franchise, one of the most appealing markets is the city of Manchester. With a vibrant culinary scene, the city is the ideal location for franchisees to launch their new business. However, there's a significant number of sushi franchises to choose between and, if you're to make an informed business decision, youll need to know all the details. Here, we take an in-depth look at three of the most popular sushi franchises on the market.

Yo! Sushi is a UK based franchise that began trading in 1997 when the business' first restaurant opened in London. The timing could not have been better and Yo! Sushi took advantage of UK consumers enormous appetite for international cuisines. During this period, sushi went from being a food for real aficionados of eastern culture to something everything wanted to try.

Within six years of opening, the chain had grown to encompass 12 restaurants in the UK and their first abroad, in Dubai. During the financial crash of 2008, growth slowed but the business still managed and owned approximately 50 restaurants. Now, with the economy well on its way to recovery and sushi still an immensely popular dining option, Yo! Sushi has over 100 restaurants to its name.

Having won numerous business and food awards, including PETAs Vegan Food Awards dish of the year and Fish2Forks sustainability award, Yo! Sushi has perfected their business model and is ready to expand even further by bringing new franchisees on board.

To become a franchisee, you'll need to invest a minimum of £250,000, though this figure could rise to £500,000, depending on your location and a host of other factors. Yo! Sushi is also interested in striking a deal with multi-unit franchisees. These area development agreements typically consist of the franchisee investing roughly £1 million. In exchange, you'll be expected to develop five restaurants over a period of five years.

In exchange for your investment, franchisees are enrolled in a comprehensive training programme, as are all key members of staff. Support services are provided to all franchisees and will help you set up, launch, and market your franchise, too. The company pride themselves on providing the best support in fast food franchising, so you should never feel as though youre not getting the support you require.

Currently, ISO Sushi boasts a franchise network that consists of four restaurants spread over London, Kent, and Wolverhampton. The chain focuses on authentic Japanese sushi, and uses only the finest of ingredients, guaranteeing all dishes are of the highest quality. The restaurant also specialises in wok-fried and grilled dishes, allowing for greater diversity and ensuring that theres something for everyone on the menu. As a relatively new franchise, there are many remarkable investment opportunities available and new franchisees will be able to select a territory anywhere they wish in the country.

ISO Sushi is also an affordable investment opportunity and benefits from a lower franchise fee than other, better-known brands. For just £10,000, you could manage your own sushi restaurant and begin building your franchise empire. A 5% royalty fee and 1% marketing fee are levied each month by the franchisor, but ISO Sushi advertises a potential profit margin of 300% for its franchisees.

After investing, franchisees receive help selecting a business location, fitting the restaurant, and launching the new franchise unit. Operations training and marketing tools are both provided, with a particular focus on food hygiene, customer service skills and marketing. All franchisees are encouraged to set high standards and to push for greater revenue, allowing you to grow your business as quickly as possible. With ISO Sushi theres a particular emphasis on allowing franchisees a high degree of flexibility in your work schedule. This enables you to organise your professional life around your personal life and to maintain a healthy work/life balance.

Sushi Daily is part of the KellyDeli group and operates more than 700 kiosks across Europe. The business has prioritised the creation of high-quality, authentic sushi and has built its business around the expertise of the much-respected Master of Sushi, Yamamoto-San, coupled with the business acumen of Kelly Choi. The pair worked together closely to design an entirely new sushi experience for European consumers and their first store opened in 2010 in Lyon, France. Since then, expansion has occurred at a remarkably rapid pace, and you'll find Sushi Daily kiosks in 10 countries, including the UK, Spain, Italy, Germany, and the Netherlands, amongst others.

The Sushi Daily menu encompasses everything from Maki rolls to sweet treats and is made fresh at the start of every day. The diverse menu consists of more than 100 recipes and also includes some specialist drinks and snacks. Franchisees will need to invest approximately £25,000 - £35,000 to buy a Sushi Daily franchise, though this figure will vary according to location and the size of the kiosk.

In return for your investment, youll receive assistance accessing prime retail locations, be able to utilise the companys existing network of partners and gain a great deal of support from the franchisor. Training in sushi preparation, food hygiene, logistics, and management are all provided, and all franchisees receive the business full collection of operations manuals.

Day in the Life: What It Takes to Run Your Own Food Truck Business

Starting a food truck business can be a great way to build up a strong, stable [...]

Q&A: Does Nando's Franchise in the UK?

In recent years, fusion foods have become a popular way of bringing something [...]

It's Never Too Late to Start a New Business

If youre fed up with your current job but think its too late to start a new business, [...]

Today we consider how the COVID-19 crisis and the UK population being told they [...]

Bootcamp Pilates is a revolutionary fitness programme that is both challenging and engaging, and delivers inspiring [...]

THE global leader in Thai fast casual dining. Its not just that we use the freshest ingredients, or the amazing [...]

Its in our bones