City Spotlight: 5 Advantages of Running a Sushi Franchise in London 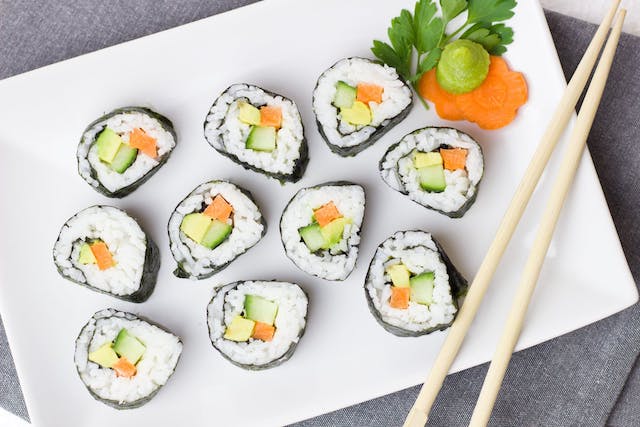 Sushi is fast becoming a firm favourite for both a lunchtime snack and eating out. But why is London in particular such a fantastic place to start a sushi franchise? Let’s find out.

The UK loves sushi. Supermarket giant Tesco partnered with restaurant chain YO! Sushi a couple of years ago to meet the high customer demand. Not to mention that high street sushi chain Itsu’s sales doubled in the five years up to 2017 (The Guardian). Therefore, with statistics clearly proving that the sector is showing no sign of slowing down, there couldn’t be a better time to open a sushi franchise.

The sushi craze kicked off in the UK in the mid-1990s when sushi restaurants started opening around the capital on a large scale. In an increasingly globalised world, sushi was the latest international cuisine to cement itself as a national favourite, and soon everyone was dining out on Japanese cuisine. In this article we shine a spotlight on London and delve deeper into why operating a sushi franchise there is such a smart business decision.

Advantages of running a sushi franchise in London

1. It has an experimental culinary scene

London's diverse culinary scene was crucial for the growth in sushi's popularity across the UK. Cosmopolitan and experimental, the capital has typically been the first city to embrace new foods, restaurants and cuisines, ensuring they have a strong foothold before spreading out across cities around the country. This was also true of sushi.

But what does this mean for your sushi franchise? Well, for starters, Londoners will love what you’ve got to offer. But, secondly, it means you can get creative and try fusing interesting flavours to create a business that stands out from the rest.

2. Sushi first became popular in the UK in London

The emergence of Yo! Sushi in Soho in 1997 signalled that raw fish had made the jump from exotic, eastern delicacy to the mainstream and that there was no looking back. The internationalisation of the Yo! Sushi brand was a big step for the British business and marked the moment at which sushi entered the mainstream market.

Soon, new sushi restaurants and brands were emerging at a remarkable rate, with some attempting to create a unique fusion by melding Japanese cuisine to other international cuisines and others moving into the supermarket or deli-counter side of sushi retail. London became home to a burgeoning sushi culinary scene, and sushi quickly became the capital’s favourite new food. It’s still one of the most popular cuisines to this day.

3. Londoners love food on the go

One of London’s favourite private dining trends is ‘big flavours and little bites’, and sushi can certainly fall under this description. It’s also the perfect food to be picked up and consumed on the go.

London is notorious for having a fast-paced lifestyle, with lots of workers being too busy to sit down and grab a bite to eat at lunch. Sushi is compact and can easily be picked up and eaten while getting from A to B. And, while only four percent of us choose sushi in comparison to sandwiches (55 percent), hot food (27 percent), salads (eight percent), and soups (four percent) (Harris Interactive survey), when it comes to lunch time, there was a time when it wasn’t on offer at all.

So creating a sushi franchise with a menu that can easily be consumed on the go and targets the lunchtime market could be a very lucrative venture.

4. The healthy eating trend is big in London

Research suggests that 60 percent of consumers choose Japanese cuisine because it is healthy. In recent years there has been a healthy eating shift in London and across the rest of the UK, where consumers are becoming more conscious of what they put in their mouths. Luckily for sushi franchises, the cuisine is packed full of vegetables, grains and all the good stuff, that attracts a more health conscious customer.

Another trend at the top of the list is veganism/vegetarianism. More and more members of the public are trying Meat-Free Mondays and Veganuary, as there is a global shift in people reducing how much meat they eat and even, more recently, their animal product consumption.

Veganism continues to become a mainstream lifestyle in London, and this city takes veganism to a new level. Ken Spector, a spokesperson for HappyCow.

In fact, HappyCow ranked London the most vegan-friendly city in the world!

There are many vegan sushi options, so it is a firm favourite of many people who follow the practice. So if you open a sushi franchise in London that specialises in a plant-based menu, you could be on track for a winner.

While there aren’t any recent statistics demonstrating how popular sushi is in the vibrant UK capital, we can see the viability of sushi restaurants by the fact that Sticks ‘n’ Sushi is the fastest-growing restaurant group in the UK (bighospitality). It has a total of 21 restaurants spread across London, Copenhagen and Berlin and, over the last three years, has generated a compound annual growth rate of 129.2 percent.

Start a sushi franchise in London

Sushi is clearly a popular food choice for much of the British public and the industry looks like it’s going to continue to grow. UK residents were first introduced to sushi in London. So, with the delicious cuisine having its roots in the capital and for the other reasons discussed, choosing London as the location for your sushi franchise is an excellent idea.