The Definition of a Franchise Today 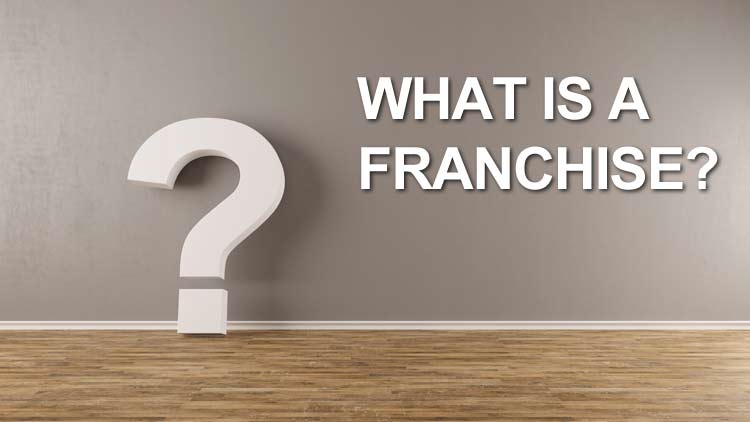 You’ve heard the term franchise thrown around, but do you know its definition? In this article, we’re going to explain the difference between a franchise and a new business and explore the franchise industry as it is today.

You’ve dreamed of running your own business, choosing your own working hours, and managing your workload, but what is a franchise? Could it be the way for you, someone with little or no experience as a business owner, to become your own boss? Let’s dive into the world of franchising and learn more about the lucrative cross-sector concept.

What is a franchise?

Essentially, a franchise is a type of business that sells its business model to entrepreneurs across its home country and, eventually, across the globe. For a set franchise fee, which can range from a few hundred pounds to £1 million+, anyone can open a location of that business or start to offer its products and services from home. The new business owner, or franchisee as they’re known, will have to follow guidelines from their franchisor about the way they operate.

Unlike being an employee, a franchisee isn’t paid a salary. Instead, they get to keep most of the profits their business makes for themselves, after paying small annual fees that cover things like advertising, marketing and general business support. Your franchisor will not interfere in the day-to-day running of your business, and you’ll be free to recruit staff and make other key decisions as you wish.

“A method for expanding a business and distributing goods and services through a licensing relationship. In franchising, franchisors (a person or company that grants the licence to a third party for the conducting of a business under their marks) not only specify the products and services that will be offered by the franchisees (a person or company who is granted the licence to do business under the trademark and trade name by the franchisor) but also provide them with an operating system, brand and support.”

If you fancy learning more about the history of franchising, check out Franchising 101: how franchising began, where we take a deep-dive into the sector’s fascinating origins.

Structure of a franchise business

A franchise package generally falls into one of two different categories: ‘business format franchising’ and ‘product and trade name franchising’. In the UK, the former is much more common. Under this scheme, the franchisee pays an initial fee and ongoing royalties in exchange for use of the business model and support of the franchisor in everything from store design to staff training.

On the other hand, the ‘product and trade name franchising’ scheme is implemented when a franchisor simply offers the franchisee the right to sell their products. This model is more commonly called ‘licensing’ and is favoured by existing businesses looking to incorporate a big brand’s products into their range. You can find out more about the two models in our article ‘what’s the difference between franchising and (brand) licensing?’ if you’re curious.

The franchise industry in the UK

Franchising is a very lucrative concept here in the UK. The 2018 bfa NatWest Franchise Survey, widely considered the most accurate measure of the franchising world, revealed how large the industry is. Franchising contributes more than £17.2 billion every year to the UK’s GDP and operates in virtually every sector – you’ll find everything from home care franchises to child care franchises to B2B franchises operating here.

It’s also a huge source of opportunity for the country’s workforce. More than 710,000 people are employed by franchises, from teenagers in part-time employment to established businesspeople managing multiple units. These jobs are highly recession-proof too, as less than 1% of franchisors shut down their network per year due to commercial failure and more than 93% of individual franchisees are trading profitably.

Franchising can only get bigger if the past trends are anything to go by. When the survey was conducted in 2018, there were 48,600 franchise units across the UK – an increase of a massive 10% on the bfa’s last survey in 2015. There are now 935 franchise concepts (or business formal franchise systems) operating in the UK, which is double the number that could be found here just twenty years ago.

There’s no set image of a franchisee anywhere in the world. It’s one of the best things about franchising – the concept is open to ambitious people of any age, race, gender and from any financial background or career path. Statistics suggest that the franchise industry is now more diverse than ever before. The bfa found that 18% of all franchisees are under 30, and this number continues to grow year on year, showing that you don’t need decades of experience to get involved. 40% of all franchises can also be run from home, so stay-at-home parents or those with disabilities can get involved.

Plenty of women are also making their fortunes in franchising (30% of the whole industry). Their presence within the industry is increasing, as 37% of new franchisees are women, an increase of 20% since 2015. The survey also found that female entrepreneurship is currently higher than the national average for small and medium-sized businesses.

There’s also plenty of room for franchisees with big ambitions. Multi-unit franchising (the operation of more than one location of your chosen franchise) grew by 7% between 2015 and 2018 and now 36% of all franchisees operate two or more franchised locations.

How much money do franchisees make?

It’s difficult to know how much franchisees make, as each franchise concept promises very different financial returns. However, the bfa/NatWest survey revealed that 60% of franchisees reported an annual turnover of more than £250,000. Many franchises also claim that their franchisees can generate seven-figure turnovers within just a few short years of business, so it’s safe to say the industry has plenty of profit potential.

Even if you’re not in it for the big bucks, it’s reassuring to know that virtually all franchisees report that they’re trading profitably. A franchise can offer financial stability and the chance to become your own boss in a way you’d never previously envisioned.

As you can see, franchising has never been in better shape than it is today. It’s a key part of the UK’s economy, keeping 3% of our workforce occupied and fed, and is set to grow over the next decade. It’s clear that there is no typical franchisee, so you can get involved with a franchise that works for you no matter who you are. If you’re ready to find the ideal opportunity for you, explore our expansive UK franchise directory now.

Can Franchising Be a Passive Income Source?