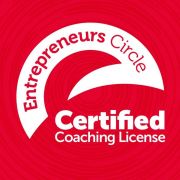 Entrepreneurs Circle Coaching Licence Everything you need to become a hugely successful and highly profitable marketing coach for small businesses...

Business coaching franchise Entrepreneurs Circle has amassed 100 franchisees less than a year after launching the concept.

While 2020 has been a rocky year for many businesses, Entrepreneurs Circle has bucked the unfortunate trend with its incredible first seven months. As the brainchild of entrepreneur, author and franchise guru Nigel Botterill and wife Sue, who have previously launched three other successful franchises, it was bound to be an appealing option for budding businesspeople across the UK.

My Mag (the brainchild of wife Sue), thebestof.co.uk and My Social Media Business were all incredibly popular with entrepreneurs across the globe. In 2007, when economic trouble began, Nigel knew he needed to help support the business community through this trying time. So, he launched business coaching franchise Entrepreneurs Circle – an organisation dedicated to guiding business owners through the recession and beyond.

The concept took off and quickly grew into the UK’s largest membership organisation. Tens of thousands of entrepreneurs were able to access advice, training and tools to help them grow their businesses. Events were hosted that welcomed the likes of Peter Jones, Deborah Meaden, Karen Brady and Steve Wozniak to the stage. Nigel even found the time to write a book, Botty’s Rules, which became a Sunday Times Bestseller in 2011.

However, Nigel and Sue recognised that many small business owners could benefit from a personal approach to business coaching. So, in 2016, they launched the Entrepreneurs Circle Coaching Programme and built a team of in-house coaches to offer personalised one-to-one support to clients across the globe.

Never one to miss an opportunity, Nigel recognised that there was potential to create another franchise concept from the Entrepreneurs Circle Coaching Programme. He knew it would be impossible to help all of the UK’s small businesses from its Birmingham HQ. Nigel amassed more than 50 franchised coaches within just two weeks of launching back in 2019.

Now, despite the incredible challenges many businesses have faced in 2020, the Entrepreneurs Circle franchise concept has gone from strength to strength. It welcomed its 100th franchisee in July and its network of coaches are now working with SMEs across the UK to help protect their business from the economic uncertainty.

Want to find out more about this incredible franchise concept? Check out its client page.

Entrepreneurs Circle looks back on 2020

Entrepreneurs Circle’s founder Nigel Botterill has revealed how his [...]

Entrepreneurs Circle was forced to make its annual awards ceremony a [...]

Entrepreneurs Circle has impressed its clients and now has a sparkling [...]

Investors from the Entrepreneurs Circle franchise network have revealed [...]

Business coaching franchise Entrepreneurs Circle is the latest addition to [...]