It’s a 10! 50 stars awarded to ActionCOACH after 10 years of franchisee satisfaction 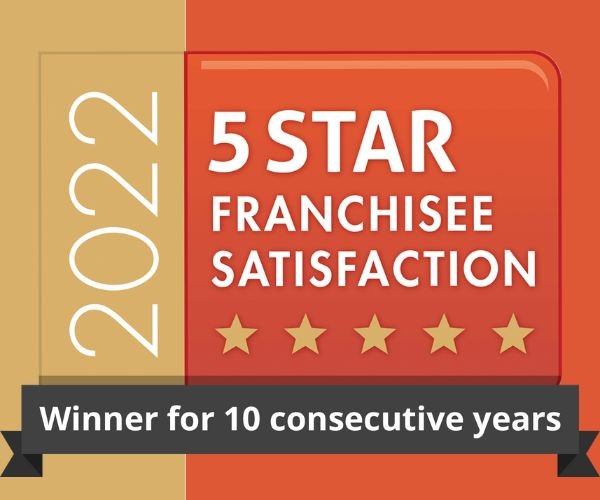 If you’re considering a franchise, you might want to consider the views of people who have already invested in the franchise before looking at anything else. There are currently only two elite franchises that have been rated 5-Star for Franchisee Satisfaction every year from 2013 to 2022 – ActionCOACH and Puddle Ducks - leaving them with 50 stars and fifty reasons for a potential franchisee to invest.

The latest results have been published from WorkBuzz, an independent company who have gathered feedback from over 300 franchise brands for its annual Franchisee Satisfaction Benchmark Survey since it launched in 2011. For an incredible 10th consecutive year, ActionCOACH franchise partners have rated their franchise above average in every category from rewards to culture and from training to support.

ActionCOACH’s culture of teamwork was evidenced once again as their franchise partners rated them 93% for peer support. Alongside this, ActionCOACH received a 95% score on their products and services, demonstrating the range of options for business owners to engage with the brand, from the low-level investment of a monthly BusinessCLUB to ActionCOACH’s flagship one-to-one mentoring offering guaranteed profit growth to UK business owners.

Ian Christelow, Chairman at ActionCOACH UK, said, “I feel honoured to be part of a company with such a wonderful team. It is only through the collaborative nature of our UK support team, franchise partners and their teams that we have been awarded this prestigious 5-Star Franchisee Satisfaction status for the 10th year running. This award is another step towards reaching our goal for 100% of business owners to know about ActionCOACH and the valuable work we do by 2029.”

Julie Wagstaff, Managing Director at ActionCOACH UK, added, “We’re thrilled to be one of the first franchises to be able to announce the 5-Star status for 10 years in a row! Achieving the 5-Star Franchisee Satisfaction Award year after year is further evidence of the consistency of excellence delivered by our UK Support Team and our network of franchise partners. ActionCOACH thrives on positive word of mouth in the business community and building a team of delighted franchise partners is, and needs to stay, front and centre of everything we do. They have all bought in to our culture of teamwork and abundance, getting a buzz from helping others succeed.”

Sharon Weston, Head of Franchising at WorkBuzz which coordinates the survey, said, “It’s a big achievement being recognised as a 5-Star franchisor once, but 10 years running is a whole other level, especially given the challenges of the pandemic. I’d like to congratulate Ian, Julie and the whole team on this amazing achievement and for providing exceptional leadership across the last decade.”

To find out more about the franchise with 50 stars of satisfaction from its team of franchise partners, visit actioncoach.co.uk

ActionCOACH franchise partner Kevin Riley was named a winner of the Great [...]

Brad Sugars recently sat down with Kevin Weir, a franchisee with [...]

Brad Sugars recently sat down with Kevin Weir, a franchisee with [...]

ActionCOACH ranks as the best B2B franchise in the UK

The world's number one business coaching team, is celebrating after being [...]