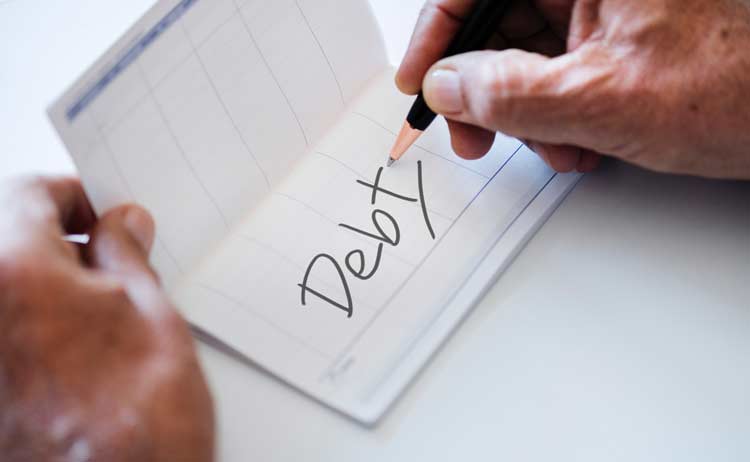 Also known as public debt, national debt or sovereign debt, government debt is money owed by the government to creditors.

The world of government debt is quite complex, so let’s go back to basics. The government has two main ways of generating capital: through taxation, such as Income Tax, National Insurance and Value Added Tax (VAT), and by borrowing money, usually through bonds.

Most people will have to pay taxes at some point in their life, contributing to services that benefit the wider community, such as those relating to health, education and transport. Taxes also go towards state pensions and help to pay off interest on the government debt. The difference between the amount the government spends and brings in is described as the ‘deficit’ - if the former amount is larger than the latter. If the government brings in more than it spends, the difference is known as the ‘surplus’.

The government borrows money by taking out ‘market’ loans, most commonly from businesses who work with pension funds or insurance. These businesses buy government bonds and benefit from the interest they gain over time. The government is usually able to pay back the money they owe because they rely on the stable income generated by public taxes. This means that government bonds are a relatively safe and reliable investment for businesses that would otherwise invest in the stock market.

There are, of course, advantages and disadvantages to this government borrowing. While around 40 percent of the government debt is owed to international businesses, the majority of it is an internal debt that can be categorised as being owed ‘to ourselves’. On the other hand, because government loans represent an attractive alternative to less secure private sector loans, businesses in the private sector are forced to increase their loan interest rates in order to entice investors, putting themselves at risk. This can be extremely detrimental to the economy; it has been shown that private sector debt is much greater than government debt, and its continual generation plays a key part in financial crises.

The amount of debt the government holds fluctuates over time and is greatly affected by national events. For example, in 2005 the UK’s government debt was below £0.5 trillion, but as a result of the financial crisis and recession that began in 2008, the debt doubled to reach £1 trillion in 2011. By 2016, the government debt had grown again, totalling £1.5 trillion.

Government debt is often considered in relation to the UK’s Gross Domestic Product (GDP) – the country’s total ‘income’. GDP can be measured in three different ways:

When the GDP is considered alongside government debt, it is called the government-debt-to-GDP ratio. This calculates the debt as a percentage of the GDP and gives insight into the economical health of the country.

What is GDP Nominal vs GDP PPP?

If a country wants to find out the average income of its residents, it can calculate its ‘GDP per capita’, dividing the total country’s income by its number of residents. This is useful when comparing one country to another. However, like with GDP, there is more than one way to calculate GDP per capita, which is split into GDP Nominal and GDP Purchasing Power Parity (GDP PPP).

GDP Nominal is an absolute measure and does not take into account the divergent value of the same products in different countries. Changes to a country’s exchange rate will impact the country’s GDP performance, despite the fact that it probably made no impact on its residents’ standard of living. A more comprehensive way of comparing countries’ GDPs is with GDP PPP, which considers the relative values of one country’s products compared to another, and places them against the average income to discover the true standard of living. One example of this is The Economist’s Big Mac ranking, which, since 1986, has compared the cost of a McDonald’s Big Mac burger in dollars across a range of countries. In January 2018, a Big Mac would set a customer back just $1.6 in Ukraine, but $6.8 in Switzerland.

There are many factors which GDP does not consider. Changes in population inevitably have an effect on GDP, but are not taken into account. An example provided by the Bank of England explains that the GDP could rise by two percent, but if the population has grown by four percent in the same time frame, the country’s average income is actually lower.
What GDP per Capita Doesn’t Measure

An average income is exactly that, and does not reveal how wealth is divided across the country’s residents. Figures which suggest that average earning figures are increasing could be an indication that income across society is increasing, or that just the wealthiest are becoming better-off.

But even the government-debt-to-GDP ratio has its limitations in terms of what it can tell us. The ratio could denote a healthy economy while other aspects of the country is in turmoil; for example, wars tend to generate production, boosting the GDP.

Therefore, government debt should be considered within its context. Those looking to discover the true health of the country’s economy should look at a range of key factors including exchange rate, standard of living and public welfare.