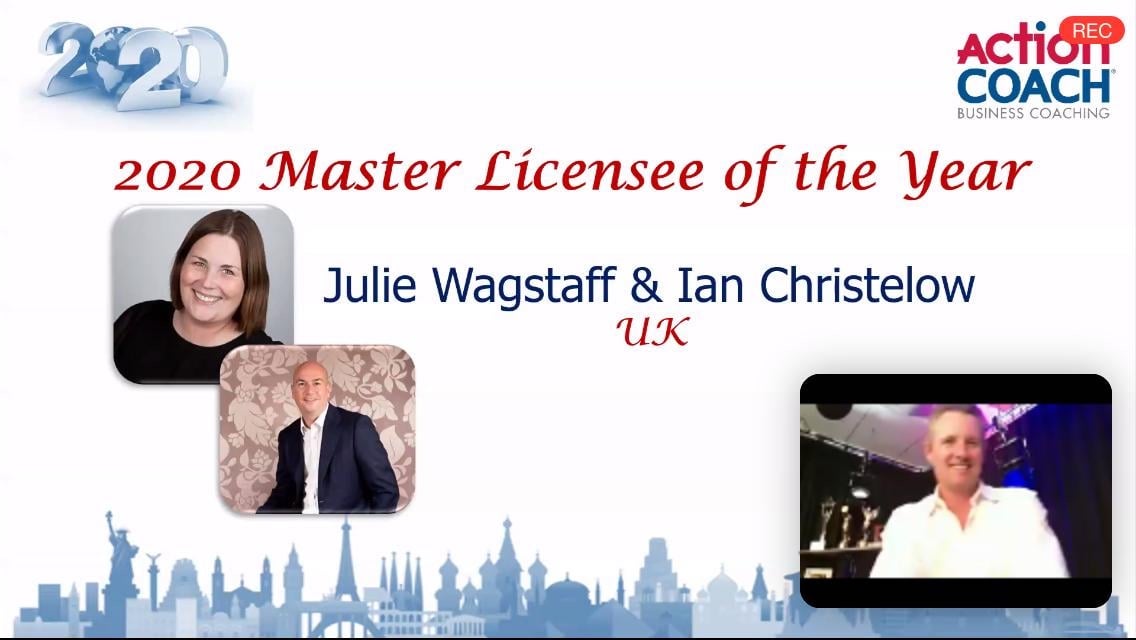 At this year’s global conference, ActionCOACH UK walked away with Team of the Year for the 12th consecutive year – an incredible achievement, when you consider the world’s number one business coaching franchise is in 80 countries and started in Australia eight years ahead of launching in the UK. With a third of the overall awards going to the UK team, it’s been another successful year, as the team rose to the challenges of the COVID-19 pandemic.

The three-day event, held virtually for the very first time, delivered knowledge and development for ActionCOACH franchise partners through an incredible line-up of speakers, including the ‘Queen of Facebook’, Mari Smith, and Jeffrey Gitomer, the number 1 author on selling. Franchise partners also had the privilege of learning from the world’s top business coach, Brad Sugars; the world’s number one executive coach, Marshall Goldsmith; and the highest-earning business coach in the world, Bruce Campbell, as they shared how they help their business owner clients to achieve life-changing results.

Julie Wagstaff & Ian Christelow, Co-founders of ActionCOACH UK, were presented with the award for Team of the Year.

“12 years in a row - what an outstanding achievement for our team!” said Ian. “The award is based on average income of coaches in each country and net growth of the coaching team, so to stay at the top of 80 countries around the world is amazing. It’s a real testament to the hard work of everyone in the UK Support Team and over 200 UK-based franchise partners. It’s great to see our business coaches help so many businesses not just survive these challenging times, but thrive.”

The pair were not the only UK counterpart to be commended at the awards. Lucas Vigilante, an ActionCOACH in Essex, was accepted into the coveted Global Hall of Fame. This recognises his impact on the ActionCOACH community, embodying the essence of ActionCOACH and its 14-point culture.

“It came totally out of the blue,” Lucas said. “I was watching whilst in a log cabin in the Cotswolds and I suddenly heard my name being mentioned - I wasn’t expecting it. ActionCOACH has transformed drastically in the last few years into the business I dreamt it would become and it’s been amazing to be part of that process. To be accepted into the Hall of Fame is like all my dreams coming true.”

Other UK winners include Stephen Unwin, receiving the award for Best Client Retention, Parag Prasad and Mark Page who both received awards for their incredible success with the business coaching programmes ActionCLUB and ProfitCLUB.

Kevin Riley, from ActionCOACH Warwick, was also in the winners’ club, scooping the award for Global Rookie Coach of the Year. The accolade is based on client income for the first full year of running an ActionCOACH franchise and, despite the challenges caused by a UK-wide lockdown, Kevin certainly hasn’t made any rookie mistakes.

“These past few months have been a test for the majority of my clients, so providing a helping hand through lockdown and out the other side felt amazing. To see the progress of my clients recently was all the reward I needed and to win Global Rookie Coach of the Year was the icing on the cake. Unsurprisingly, I can already see some great new UK franchise partners coming through who will be smashing my record rookie year by the time the next global conference in Rio de Janeiro comes around!”

Following a year of extreme highs and lows, it’s no wonder people [...]

As the COVID-19 pandemic did for many people, it forced Fiaz Sadiq to [...]