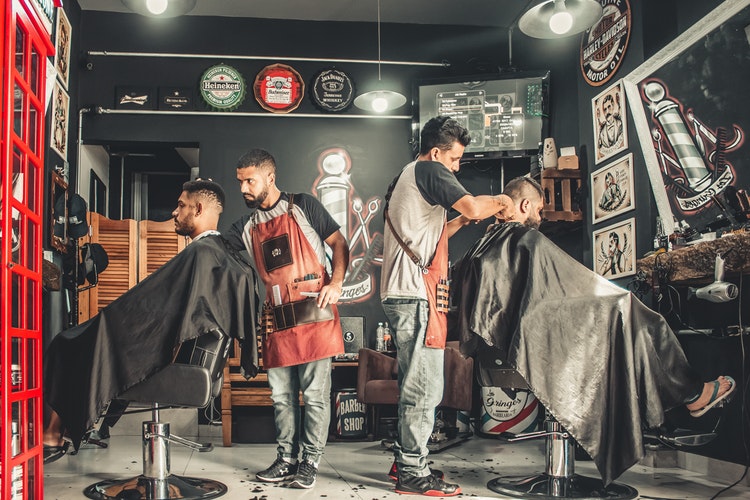 If you’re looking to start a barber shop franchise, there’s never been a better time to enter the multi-billion pound industry. The men’s grooming industry is expected to hit £19 billion by 2020 [beautyexperience.com] and more and more men in the UK are taking the time to prioritise regular haircuts as essential self-care and maintenance rather than a luxury. Add in the rise of exceptionally groomed reality stars and the decreasing stigma around male self-care and it’s no wonder that men’s grooming has become so popular.

It’s estimated that there are more than 42,000 beauty and barbering businesses in the UK, generating nearly £7.5 billion for the economy every year. Barbershops are also one of the top ten most popular businesses for people to start their own enterprise in [national hairdressers’ federation]. If you’re looking to start your own barbershop business, here are X of the most exciting franchise opportunities in the UK.

How have barbershops changed?

Barbershops used to simply be a place for men to get their hair tidied and the experience was far from luxury. Now, customers are often treated to a complementary bourbon or beer as part of their offerings, as customers demand more than just a trim from their barbershops. Some upmarket barbershops also have a strong social media presence, where they showcase their now vast range of services and invite influencers in to show how their fades, trims and shaves can help the regular man emulate their celeb idols.

Many men also now treat a trip to the barbers as an act of self-care, where they can improve their appearance and also take some time to unwind and get things off their chests. The Lions Barber Collective is just one of the organisations pioneering this in the UK and aims to get more men talking about what’s bothering them by making barbershops a welcoming, open space to talk.

What’s more, men don’t just want to get their hair cut at the barbers anymore. In past years, the thought of having a skincare routine or paying for treatments would have made men baulk in horror, as it was seen as a feminine thing to do. Now though, the so-called ‘metrosexual man’ is becoming the norm. 75% of men associate good grooming with high self-respect and the average man will spend an incredible £75,030 on their appearance over their lifetime. Considering this, the increase in men’s cosmetic treatments, including waxing, facials and hair colouring isn’t a surprise to many.

But who are the biggest brands in the UK’s barbershop franchise scene?

Ruffians is the ultimate example of modern barbering success. Having only opened in 2012, it already boasts four premises across London and Edinburgh – including one located on the men’s floor of a Liberty department store. It is driven in its mission to move away from the belief that going to the barber’s is a task to tick off the to-do list, instead transforming it into an experience to enjoy.

Coming in at £58 for a standard cut, the service isn’t cheap, but it’s a price that many are willing to pay. With added perks such as coffee and whiskey bars, customers are signing up for a full salon experience.

In its first year of trade, Ruffians won Best Independent Newcomer at the British Hairdressing Awards. In the years since, the barbering brand has been decorated with a number of awards, including Best Salon Experience in 2014 and Best Salon Team in 2015 at the Creative Head Awards. Riding the growing wave of the male grooming movement, Ruffians has established itself as a British barbering institution.

Since it established itself in the vibrant capital almost 40 years ago, Jacks of London has become of the most successful barbershop franchises in the UK. It promises a blend of the classic and contemporary for those who visit, bringing a touch of traditional barbering together with professional, modern stylists in its relaxing male-only shops.

You won’t need to be a barber to get in on the opportunity, as the franchise is looking for those who can oversee their own store and manage a team of skilled barbers to maximise profits. Each franchisee will need to be dedicated, driven and self-motivated though, as well as keen to work in a customer-first environment every day.

New members of the network will be supported throughout the franchise process, including start-up and ongoing support with everything from marketing to recruitment to sales to ensure you have the best possible chance of success.

The success story behind Chops is compelling proof that demand for a high-quality barbering experience extends beyond the nation’s capital. Chops has outlets across Somerset, including Cheddar, Wells and Street. It was named The British Hair & Beauty Awards Best British Barber Salon of 2015, and its success can be attributed to high-quality customer service and inviting atmosphere.

Its fresh brand design meets the desires of a young, progressive audience who go to the barbers for more than a trim. The barbershop is seen as a social space and often finds its ways onto young customers’ online profiles through social media updates. In a world where individual identity is key, getting your haircut – and where you go to get it cut – has become a highly personal statement. Though not a franchise, it’s still an example of how to run a successful barbers business.

Today, Rush Hair is a globally competitive hair brand that’s part of the Point Franchise network. Based in the UK, the franchise caters to a customer base of over 16,000 every week. And they keep coming back! The average Rush customer returns to its salons every six weeks and spends approximately £600 per year.

Rush is looking for franchisees who are capable of offering a minimum initial investment of £15,000. With full training and support included in the franchise package, you can count on this being a worthy investment. Rush has access to a network of the market’s most premium hair products, including L’Oréal, ghd, REDKEN, SHU UEMURA and Kerastase Paris. This is part of the reason why it has established itself as one the UK’s most successful hairdressing companies.

Supporting its popularity on the high street, Rush Hair has been the recipient of numerous high-profile hairdressing awards. Its artistic team has won over 14 British hairdressing accolades, amongst them some of the most prestigious in the industry. In 2017, Rush won Artistic Team of the Year at the British Hairdressing Awards, the UK’s most high-profile awards night. Its work was recognised again by the same awards body in 2018, when Rush’s artistic team entered into the British Hairdressing Award’s Hall of Fame.

Rush Hair is looking for franchisees with quality managerial skills and excellent business acumen. Premises are usually located on central streets and shopping centres with heavy footfall, and each salon requires on average around 800 sq ft. Total investment costs for opening a franchise average out at an approximate £160,000, which can be financed based on the applicant’s credit history.

Rush hair currently has over 70 salons operating across the UK.

Mr Barbers is currently the UK’s largest barbering brand and has become known for offering excellent barbers’ services across the country. Its founders are barbers themselves, so they understand the unique challenges that come with running your very own shop and set up the business to help other stylists across the UK access their fantastic business model.

Mr Barbers offers traditional male grooming services through experienced, friendly stylists. Each applicant’s franchise will be tailored to them to ensure the best possible chance of success and the opportunity is suitable for everyone from novices to those looking to open their first business to industry veterans. The franchise package includes:

Since it was founded in 1999, V’s Barbershop has been bringing an upmarket barbering experience to men across the world. Harnessing the power of nostalgia, its locations are styled to replicate barbershops of decades gone by, while its services are on the cutting edge of innovation in men’s grooming.

Founder Jim Valenzuela missed the traditional father-son barbershop visits he’d enjoy as a young man and wanted to bring that back to the people of America – so V’s was born. Now, it has more than 50 locations spanning the country, with many more in the pipeline to open in the coming months and years.

Should I open a men’s barbershop franchise?

With so many opportunities out there right now, there’s never been a more exciting time to join a barbershop franchise in the UK. Whether you choose to specialise in men’s grooming or open a salon that caters for every gender and styling requirement, take a look through our exciting selection of franchise opportunities and find the ideal business for you to join.

Article published on 25/01/2021 16:00
DEVELOPING YOUR OWN BUSINESS IN FRANCHISING
Did you enjoy this article? Please rate this article
Average rating 5.0/5 based on 1 vote
These franchises may interest you