If you’re interested in joining the hotel sector, you’re probably brushing up on the big players in the industry. Premier Inn is one of them – but who is the brains behind the brand? Meet Alison Brittain… 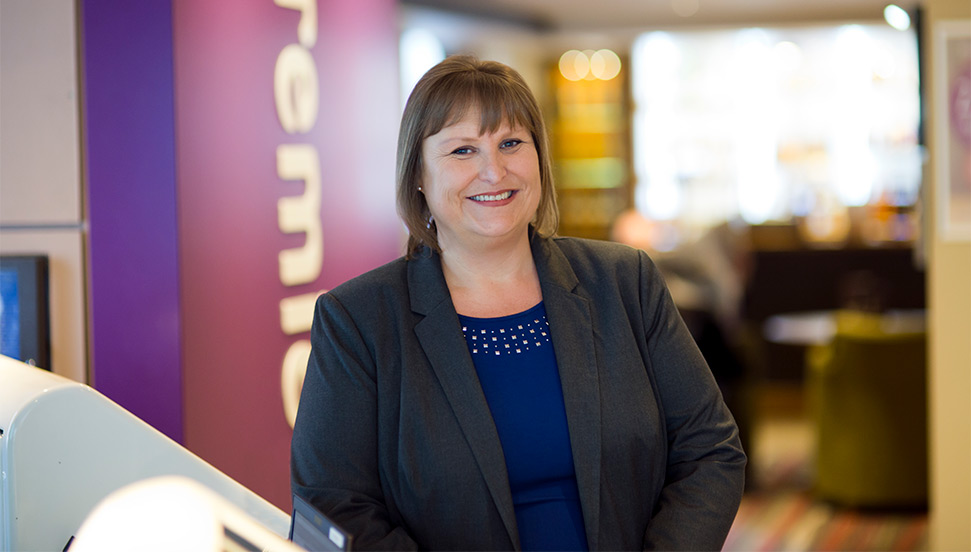 In this article, we’ll find out more about Alison Brittain, the Premier Inn CEO. We’ll also take a look at the brand and whether it offers franchising opportunities. Finally, we’ll list some alternative business partners you could form an alliance with.

The CEO of Premier Inn – and its parent company Whitbread – is Alison Jane Brittain CBE. Before her current role, she was Lloyds Banking Group’s head of retail banking.

Brittain was born in 1965 and grew up in Derbyshire. She studied for a degree in business studies at the University of Stirling before heading to the Cambridge Judge Business School for her MBA.

After this, Brittain became a graduate trainee with Barclays and worked with the bank for 19 years. She went on to work for Santander UK in 2007 and then Lloyds four years later. In 2015, it was announced that she would take over from Andy Harrison, the retiring CEO of Whitbread.

What is Premier Inn?

Premier Inn is a large hotel chain with over 800 hotels and 76,000 rooms providing guests with a restful night’s sleep across the UK and Ireland. It’s the UK’s leading budget hotel brand, and you are never far away from its purple, crescent moon logo in city centres, suburbs and airports.

Premier Inn caters for every type of guest. Regardless of whether you’re checking in for business or leisure, you’re guaranteed a comfy, king-size bed, en-suite bathroom, TV and Wi-Fi. Hotels also have a bar and restaurant where you can relax and enjoy a drink or get a bite to eat. Every morning, it serves a hearty full English and continental breakfast buffet.

Premier Inn is repeatedly named the UK’s best value hotel chain by YouGov. This is an ambitious brand with plans to further its international expansion. Currently, it has international hotel locations in the Middle East and Germany.

History of the Brand

A year later, Premier Travel Inn opened its 500th hotel in Hemel Hempstead, Hertfordshire. Then in 2006, it bought 11 Holiday Inn hotels. After this, it began to create its own new bedroom designs to roll out across the network.

In 2007, Whitbread renamed the brand Premier Inn and bought Golden Tulip UK, which included six hotels that operated under the Tulip Inn and Golden Tulip brands. They were then transformed into Premier Inns.

Significant brand reachThere are 800 Premier Inn hotels across the UK.

A year later, it was announced that there would be a £100 million expansion of Premier Inn in the UK’s capital over the next three years. In the same year, Whitbread purchased 21 Express by Holiday Inn hotels in exchange for 44 Beefeater and Brewers Fayre restaurants where building a Premier Inn was not possible.

Premier Inn opened its 600th hotel in Stratford-upon-Avon. It has since sold some of the smaller hotels to Good Night Inns, as the majority were originally Premier Lodges in less profitable locations. Despite this, in July 2015, Kingston-upon-Thames became home to Premier Inn’s 700th hotel.

Premier Inn is just one of Whitbread’s brands. Other businesses in its portfolio include Brewers Fayre, Beefeater, Cookhouse & Pub, Bar + Block, Thyme, Table Table and hub.

Sadly, Premier Inn franchises do not exist and the brand isn’t looking for business partners to help with its expansion at the moment. However, there are still plenty of ways to enter the hotel industry as part of a franchise. Find out more below.

Other franchise opportunities in the hotel industry

We’ve compiled some information about a couple of the hotel industry frontrunners that offer franchising opportunities. Read on if you’re interested in opening your own hotel franchise location.

If you live in the UK, you’ll almost definitely have heard of Travelodge. It was launched in 1985 and is now the second biggest hotel chain in the industry, with 500 locations across the UK. There are also 50 scattered around the globe, so the franchise benefits from an international customer base.

You may be interested to learn that Holiday Inn – the third biggest hotel chain in the UK – and its offshoot brand, Holiday Inn Express, are operated under franchise agreements. They’re part of the InterContinental Hotels Group (IHG), which manages 16 different hotel brands.

If you’ve been inspired by the success of Premier Inn CEO, Alison Brittain, there are plenty of ways to become a hotel owner through a franchise model. To learn more about the sector and why you should consider joining it, just click here.

Article published on 18/01/2021 08:00
DEVELOPING YOUR OWN BUSINESS IN FRANCHISING
Did you enjoy this article? Please rate this article
Average rating 5.0/5 based on 1 vote
These franchises may interest you

Unique Solution in Promoting Your Image

Specialist suppliers of corporate branded merchandise for 40 years – UK leaders in a £3billion [...]