Q&A: Does Pret-a-Manger Franchise in the UK?

Pret-a-Manger has been one of the UK’s leading high street retailers since its inception in 1983 and the prospect of opening a Pret-a-Manger franchise is an exciting one for anyone looking to put their stamp on their local high street. It’s a retailer with a heart too, as it gives away all of its unsold food to the homeless (over three million meals to date) and donates a portion of the profits its soups make to fund this operation. But does the exciting fresh food spot welcome franchisees into its network? Let’s find out …

Yes, and its website states that it’s happy to hear from interested parties across the world. It’s not 100 percent clear if Pret-a-Manger is recruiting franchisees here in the UK currently, but it does welcome enquiries from interested applicants on its website here. Pret is also keen to hear from people who would like to bring the brand to a new market but states that it does have lots of enquiries, so will only get back to those that it deems suitable.

If you’re serious about the opportunity, you’ll need to carefully fill out the application form. Pret states that it receives so many enquiries that it won’t get back to anyone who gets in touch without completing an application form first.

Pret-a-Manger was established in 1983 and opened its first store in Hampstead, London in 1984. At the time, it specialised in fresh foods and natural ingredients – an ethos that has continued into the present day. However, the original Pret-a-Manger struggled financially and was soon put into liquidation.

In 1986, the name and branding were purchased by two young businessmen, Sinclair Beecham and Julian Metcalfe, who opened their first store at 75B Victoria Street. At first, the pair served just 12 lovingly crafted coffees per day. Now, an estimated 1.4 million drinks are sold every single day.

‘Pret-a-Manger’ translates as ‘ready-to-eat’ and embodies Beecham and Metcalfe’s initial idea, which was to set up a café and takeaway eatery serving fresh, minimally processed food. The pair were sick of the heavily processed options available on the high street, which were more often than not served by unfriendly, unmotivated staff, so wanted to establish an alternative.

Did you know? Pret-a-Manger has more than 450 locations spanning nine countries

Initially focusing solely on the London market, Pret A Manger opened its first store outside of the capital in 2000. The store was located on Broad Street, New York and marked the beginning of a concerted effort to grow across several key markets.

The first French store was launched in 2012, and other locations have been developed in Dubai, Hong Kong, Singapore, the Netherlands, Denmark, China and Germany. Though the company has focused on achieving slow but stable growth, it is now considered a truly global brand and boasts a presence in many of the world’s biggest economies.

Pret A Manger boasts more than 450 stores spread over nine countries. Approximately 350 of these are UK-based. The London market is responsible for around 67 percent of the company's trade, and it is also where the brand first made its mark. 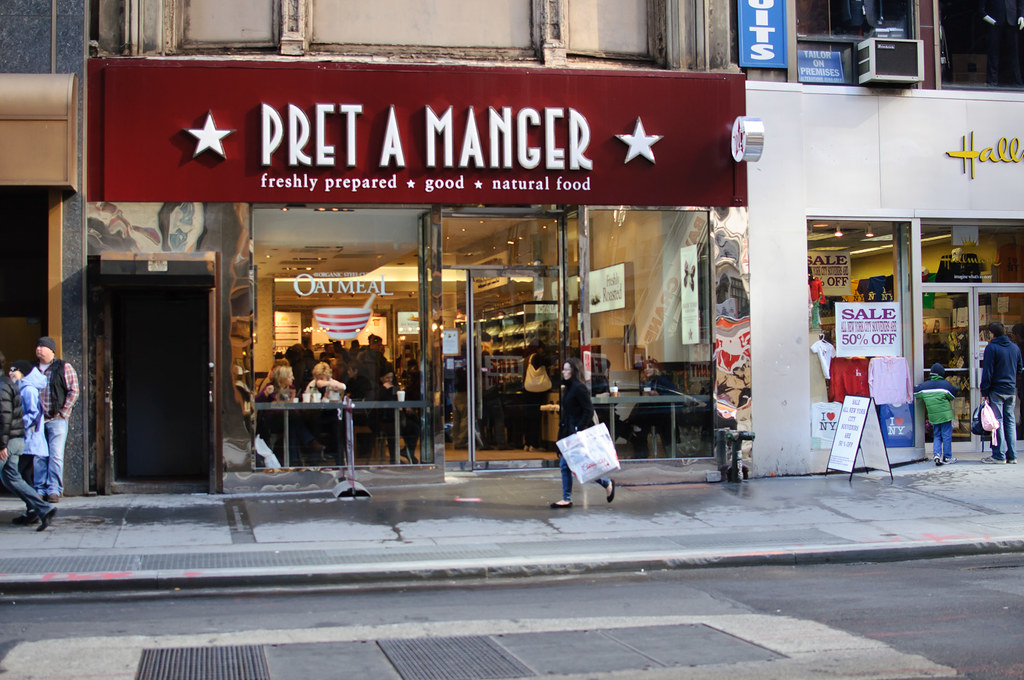 If you’re looking to start your very own Pret-a-Manger franchise, it’s likely you’ve got lots of questions about what you’ll need to do and how you’ll be supported along your journey. Unfortunately, Pret is pretty vague when it comes to this kind of information. However, here’s what we do know about becoming a Pret-a-Manger franchisee:

Anyone looking to become a Pret franchisee will need to have:

There currently isn’t any information on the Pret-a-Manger website regarding the franchise cost, including things such as franchisee fees, management fees and ongoing costs, other than what your net worth needs to be. However, there are some figures available that detail the cost of outfitting a Pret-a-Manger store and preparing it for business.

Forum discussions among potentially interested businesspeople have stated that fitting out a Pret-a-Manger store could cost around £400,000, but there’s no official word from the company about its official figures. On outfitting alone, this would put Pret-a-Manger up there with some of the more expensive quick-service franchises on the market - for reference, a Subway franchise costs roughly £200,000.

Unfortunately, Pret keeps the kind of support and training it could offer its franchisees under wraps too. It’s sensible to assume that, while there will be training to get new franchise partners familiar with the brand’s way of operating, there’s not likely to be extensive training.

As Pret asks for recruits to be familiar with the food and beverage industry, it doesn’t appear to be keen on investing lots of time in training its network from the ground up. It’s also reasonable to assume that Pret’s support package will match other similar well-established franchises, including things like marketing, sales and supply chain support throughout the franchise journey.

If you’re not sure if Pret-a-Manger is the right franchise opportunity for you, there are plenty of alternative franchises currently recruiting for franchisees right here at Point Franchise. Here are three of the most exciting.

Another alternative to Pret A Manger is Wrap It Up!, a trendy QSR franchise that offers an incredible array of world foods all contained within hearty and highly portable wraps. Since it was founded in 2006, the brand has set itself apart from other sandwich brands by offering a varied choice of international cuisine and is now looking to expand through franchising.

The total investment required to start a franchise unit is set at around £120,000 and the ideal franchisee has:

Bagel Corner takes the quick-service restaurant (QSR) sector in a slightly different direction and centres its offering around healthy and hearty bagels. With a unique digital ordering system that allows for quick order and pick-up, it’s one of the most innovative franchises around. If you’re interested in opening a Bagel Corner franchise, you can pick from one of three formats:

Currently, Bagel Corner is seeking a master franchisee to bring the concept, which has been incredibly successful in France, to the UK. If you think you fit the bill, you’ll undergo an extensive 10-day training programme and have access to ongoing, on-site support throughout your franchising journey. You’ll also need to have around £500,000 to invest in the concept and sufficient knowledge of the QSR industry to help the brand expand across the UK.

Sandwich franchise Subway is one of the world’s best known brands and has amassed a network of more than 43,000 locations in more than 110 countries across the globe. 2,500 of these alone are in the UK and Subway is keen to make sure its position as the world’s number one quick service restaurant doesn’t slip, so it’s recruiting more franchisees to expand its network even further.

If you’re looking to become part of Subway’s successful international network, you’ll need to be able to invest a minimum of £85,570 into your single store or multi-unit franchise operation. It’s also likely to be helpful if you’ve got previous experience in the food and beverage industry, as you’ll have good knowledge about the market that Subway expects from its franchisees. You’ll also need to have excellent business acumen and a professional outlook, while still being open to guidance and advice from the head office team.

Franchisees will be fully supported both at the start of their franchising journey and throughout, as they’ll have access to:

Article published on 24/01/2021 08:00
FRANCHISE SHOWS AND EXHIBITIONS
Did you enjoy this article? Please rate this article
Average rating 4.5/5 based on 2 votes
These franchises may interest you