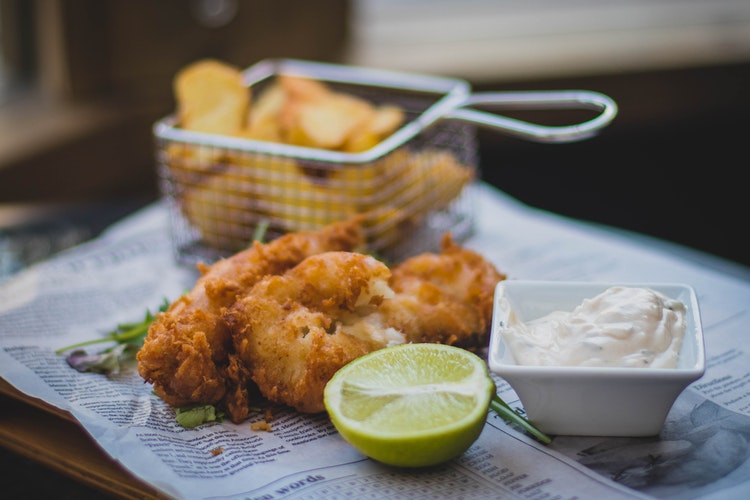 Since the dish was first popularised in the 1860s, fish and chips have been a British food favourite in the UK. Whether we’re eating it as a takeaway, in a sea-front store or in a gourmet restaurant, we can’t seem to get enough of the classic British dish. And Harry Ramsden Fish and Chips is one of the restaurants at the forefront of the industry.

This is an industry that’s thriving – and it seems like it always has been. It’s made up of 10,500 fish and chips shops that generate £1.2 billion every year. It’s no wonder this figure is so high, given that more than one in five people make a trip to their local chippy at least once a week (The National Federation of Fish Friers).

Harry Ramsden’s is Britain’s longest-established restaurant chain, headed by the eponymous ‘Uncrowned King of Fish & Chips’ (1888-1963) himself. It’s been serving up the delicious dish for over 90 years and goes all the way back to 1928 – but there have been many changes over the years.

In 1954, the brand was sold to Eddie Stokes, Harry Ramsden’s long-term business partner, for £37,500. Then, it was handed over to the Essex-based Associated Fisheries in 1965. This was the second of several changes in ownership but, in 1999, a franchise agreement with Granada motorway services was established and kiosk units were introduced across the country. Then, Granada Ltd bought the food franchise for £20 million, demonstrating its rising value.

How does Harry Ramsden’s stay relevant?

The fish and chips shop restaurant is constantly coming up with innovative ways to keep the brand fresh, such as giving the restaurants a contemporary new look, introducing an updated menu, ensuring brand awareness and implementing a great production strategy. Evidently, the brand’s business model has stood the test of time, as there are now over 30 restaurants and takeaway outlets in the UK and Northern Ireland.

1. It has a rich history

The fish and chips restaurant chain was first established in wooden hut in Guiseley, West Yorkshire. Three years later, Harry Ramsden’s set his sights on expansion and moved from the hut to a new – much larger – restaurant, fitted with oak-panelled walls, carpets and chandeliers. This was quite an upgrade, but the original hut still stands today, next to the main restaurant.

What’s more, Harry Ramsden’s had other claims to fame; his nephew was Harry Corbett, the puppeteer, magician, pianist and, most notably, creator of Sooty. He made an appearance in Harry’s Guiseley restaurant, playing the piano as diners tucked into their steaming fish and chips.

The extensive, 250-seat location even won a Guinness World Record for being the largest fish and chip shop in the world, serving almost a million customers a year. Of course, the business has expanded significantly over the years, and the Bournemouth Harry Ramsden’s branch now holds the title for the World’s Largest Fish and Chips Restaurant, as it has 417 seats, a café and a terrace.

2. It has survived numerous setbacks to get to the point it’s at today

In 2011, it was announced that the original Harry Ramsden’s restaurant in Guiseley was facing permanent closure, as it wasn’t as profitable as it had been back in its heyday. A few months after its closure at the beginning of 2012, the restaurant was bought by the Wetherby Whaler group and reopened several months later.

Phillip Murphy, one of the Wetherby Whaler founders, said: “The famous fish and chip restaurant in Guiseley is the spiritual home of fish and chips in England. It would be a national scandal if it were to close at this time of economic uncertainly.”

Thanks to Wetherby Whaler’s takeover, the original restaurant is still serving tasty fish and chips today.

3. It cares about the environment

The restaurant chain is proud to announce that it can trace the path of its fish from the sea to its customer’s plates. Before Harry Ramsden’s golden battered cod and haddock appear on our plates, they are caught in the North East Atlantic, where stocks are plentiful.

The world-famous fish are caught in the Barents and Norwegian Seas and as soon as they are on-board the boat, they are instantly frozen below -18̊C - the whole process takes place at sea. The fish remain at this temperature as they are transported to cold storage on land and reach Harry Ramsden’s kitchens.

Then, with sustainability in mind, once in the kitchens, the skilled filleting team cut the fish to size, making sure nothing goes to waste. Evidently, the restaurant franchise is dedicated to making the fishing process more sustainable and doing its bit to make sure it doesn’t leave a mark on the environment.

Today, when so many consumers are conscious of the impact their food choices have on the environment, Harry Ramsden’s offers an ecological – and delicious – food option for hungry customers.

4. It buys its potatoes with the environment in mind

Harry Ramsden is proud that its double-cooked chips are made from potatoes that come directly from British farmers who specialise in different varieties of the root vegetable. Supporting these specific farmers means the franchise is able to ensure it only uses potatoes that are in season, no matter what time of year it is.

Using British farmers is also great for the economy, supporting people who otherwise might be overlooked in favour of foreign organisations.

5. It is so much more than just a fish and chips shop

This restaurant franchise doesn’t just offer fish and chips – although, of course, that’s the main focus. The Harry Ramsden restaurant in Eastbourne has launched a series of live music events known as ‘Sounds by the Seaside’. Any money raised goes to the nominated local charity, Epilepsy Lifestyle.

This specific event runs every Saturday from 6:30pm to 8:15pm and is free to attend. Diners have the chance to make donations to the charity throughout the evening so they can positively impact on the local community as well as enjoy a tasty meal.

But this is not the restaurant’s only fundraising activity, as 1p from every customer transaction between August and December last year was donated to the charity.

Why not join Harry Ramsden’s fish and chips franchise?

Harry Ramsden’s is a fantastic fish and chips restaurant franchise that has become a household name across the UK. This isn’t your bog-standard fish and chips shop; the fascinating, ‘rags-to-riches’ history of the brand and the dogged perseverance of the people behind it demonstrate just how special it is.

The restaurant’s emphasis on sustainability and supporting British farmers also makes it attractive to the modern consumer, so there’s plenty of potential to grow in the coming years.

To find out more about joining the Harry Ramsden’s franchise, just click here. You’ll be able to find out about its investment costs, franchisee requirements and training opportunities.

>> Read more articles on the Fish And Chips sector